Welcome back to our Meet your NOHS Athletic Hall of Famers. We continue with the Class of 2018 and 1975 graduate John Janmey. 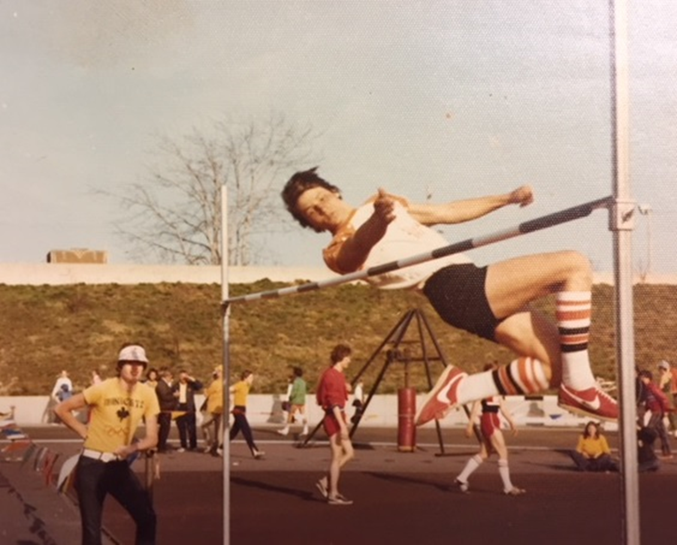 John Janmey was a multi-talented two-sport athlete at North Olmsted High School.  He excelled in football and track and field.  On the football field, John was a split end/tight end, safety, and was a valuable special teams player.  John was a two-year starter and two-year letter winner for the Eagles football team.  During the 1974 and 1975 seasons, his talents led him to being honored as an All SWC performer at the safety position.  As a junior and senior John and his teammates finished near the top of the SWC standings.  John mentioned that one of his fondest football memories was beating Westlake in the final seconds of his last game his senior year! John credits a lot of his football success to secondary Coach Gary Hackett.

In the spring, John was a member of the NOHS Track and Field team where his lone event was the high jump. He was by far one of the best jumpers in the state of Ohio during his high school career. As a senior, John set a NOHS school record (6’ 8”).  In addition, John set records at the Southwestern Conference and district track and field meets in the high jump.  During his high jump career,  John was a two-time SWC champion and district champion.  His senior year, 1975, brought him a third place finish at the State of Ohio track meet in Columbus.  Coach Peepers reflected on the state meet and remembers sitting under the goal post at the Horseshoe (OSU stadium) with John as he finished 3rd in the state of Ohio.

Coach Peepers said, “John was a very gifted athlete. He was a great competitor. “  John wanted to make special mention of Coach Peepers. “Coach Peeps was the hardest working coach I played for.  He really cared for his athletes.”  John and Coach Peepers both have fond memories of the SWC runner up finish for the 1974 and 1975 Eagle track and field teams.  John also recalled the Eagle high jump relay team as one of his high school career highlights.  They had the best relay in the state during the 1975 season.  The record breaking relay team consisted of John Janmey, Steve Miscencik, and Paul Wingenfeld.  Their combined jumps totaled 18 feet, 5 1/2 inches.  John is thankful for all the opportunities that were presented to him as a student-athlete at North Olmsted High School.  “NOHS was a great school.  I received a great education and made so many close friends.  40+ years later, I still keep in touch and see many of them!  The memories seem like yesterday!”

Following NOHS, John attended The Ohio State University and graduated with a Bachelor of Science Degree in Food Technology.  John said that he would like to thank his wonderful wife, Linda,  his incredible daughters, Lindsay and Julie, and his mom and dad for their support.   He would also like to thank his Goddaughter, Kara Foraker, a great swimmer for NOHS and his longtime friend, Bill Orr (NOHS Hall of famer in Track and Football) for all their help in getting me inducted.  John resides in Hinckley, Ohio with Linda and is retired.  In his free time, John enjoys golf, travel and spending time with his family.

Thank you for following along and be sure to check back later today for the next member of the Class of 2018!!

Amherst and Olmsted Falls
11:00 am
View All Events