Welcome back to our Meet your NOHS Athletic Hall of Famers. We continue the Class of 2011 with 1976 graduate Bill Orr. 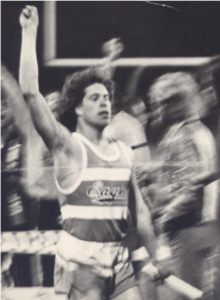 One of the more versatile track athletes in North Olmsted High School history, Bill also participated in football. In fact, one of Bill’s fondest memories is of his first pass reception in a high school football game. It was a 49-yard touchdown against rival Bay Village. Track though, was the sport where Bill really excelled. By the time he had graduated from North Olmsted High School, he had set or been a part of several record-setting performances and championships. Some of these performances included being the first North Olmsted track athlete to break ten seconds in the 100-yard dash, Southwestern Conference champion in the 100, 200, and 4×100 relay, school record holder in the 100, 4×100 relay, and the 4×400 relay and named the Most Valuable Runner in the prestigious Warrensville Tiger Relays. Bill continued his education and track career at Baldwin Wallace College and his track career continued to flourish. As a four-year letter winner, Bill became the Greater Cleveland college champion in the 200 meters and participated in ten different indoor/outdoor championship teams. Bill still remembers the precious words he read in his high school handbook the first week of school, “ Education is a lifelong process” and has taken those words to heart and tried to use that as one of his lifelong philosophies. Very appreciative of all the outstanding coaches and teachers at North Olmsted High School that help shape his life, Bill would like to especially thank Coach Peepers.

Thanks for following along and be sure to check back on Friday for the next member of the Class of 2011!