Welcome back to the Meet the NOHS Athletic Hall of Famers series. We continue with the next member of the 2003 Class in Larry Tusick.

Throughout the proud history of the North Olmsted High School wrestling program, there have been many outstanding athletes. Larry Tusick is yet another one of our outstanding young men who made the most of his talent while here at North Olmsted High School. A three-sport athlete early in his career, Larry seemed to take off in wrestling his sophomore year. Hard work and the determination to constantly improve earned Larry his place in North Olmsted High School wrestling history. Throughout his career, Larry earned the following honors in wrestling; three-time Southwestern Conference champion, team captain his senior year, district runner-up in 1973 and 1974, Most Valuable Wrestler in 1974 and state champion in 1974. 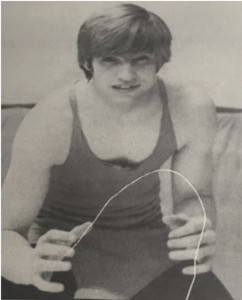 While he was collecting honors on the mat as a wrestler, Larry was also doing the job in the classroom as he was also a member of the National Honor Society. Upon entering the University of Alabama on a wrestling scholarship in the fall of 1974, Larry’s wrestling career continued to blossom. His awards and honors at Alabama included; two-time Southeastern Conference champion, two-time NCAA qualifier, captain of the 1977 and 1978 wrestling teams, team Most Valuable Wrestler in 1976 and 1978 and still holds the all-time best career record for any Alabama wrestler at 85-15. Larry attributes his love for his family and friends, his strong affection for the North Olmsted Community and the guidance and direction given to him by his high school coaches and teachers as the big reasons for his success on the athletic fields and in life.

Check back at 2 p.m. for the next member of the Meet the NOHS Athletic Hall of Famers series and the Class of 2003!!