Welcome back to the Meet the NOHS Athletic Hall of Famers series. We are continuing with the next member of the Class of 2003 in Gregory Dauer.

In the early 1980s, when you talked about athletics in the Southwestern Conference, you talked about Greg Dauer. A multi-talented three-sport athlete at North Olmsted High School, Greg excelled in football, basketball, and baseball. An outstanding quarterback and leader for the football team, Greg was elected captain by his teammates, was a First Team All Southwestern Conference selection in 1982, was a Plain Dealer Dream Team selection, and was the team’s Most Valuable Offensive Player his senior year. As a third baseman on the baseball team, Greg was elected as captain of the team, was a First Team All Southwestern Conference selection and was also named to the prestigious Plain Dealer All-Scholastic Baseball team. As outstanding as Greg 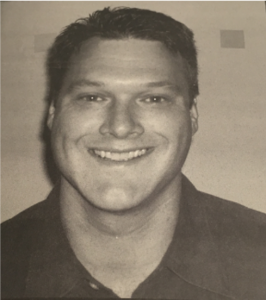 was in football and baseball, basketball was his best sport.

In the tenth game of his senior season, Greg broke the career scoring record of Hall of Famer Jack Oring. In a special moment in North Olmsted High School athletic history, the game was halted after Greg broke the record and Jack Oring presented Greg with the game ball. This record had stood for twenty-eight years. Greg is also the single-season scoring leader for boys basketball. Along with the above accomplishments, Greg also was captain of the basketball team his senior year, was All Southwestern Conference selection three years in a row and was a Plain Dealer All-Scholastic his senior year. Greg was also voted by his peers as sophomore class president as well as homecoming king his senior year. Upon graduation from North Olmsted High School, Greg received an appointment to the United States Air Force Academy and later finished his degree at Miami University.

Thank you for following along today and be sure to check back Thursday morning for the next member of the Class of 2003!!!