Welcome back to the Meet the NOHS Athletic Hall of Famers series. We are getting things started today with Albert Laisy and the Class of 2003.

An outstanding three-sport athlete At North Olmsted High School, Al participated in football, basketball, and track. As a freshman, Al made an immediate impact on the football team earning a starting position at right guard. This in itself was a very extraordinary feat as very few athletes in the history of the North Olmsted High School football program have made the varsity team as a freshman, let alone be a starter. As a sophomore, injuries to two fullbacks provided the starting right guard the opportunity to fill in at fullback. 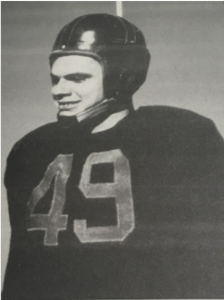 Al never looked back. As a senior player, the bruising fullback led the West Cuyahoga County League in scoring as well as the district. At the season’s end of his junior and senior years, Al was awarded as an All-West Cuyahoga County All-Star as Well as a Press Star. As a track athlete, Al was a very talented sprinter. The 120 yard high hurdles and 880-yard relay were two events in which he was a very consistent scorer. The 220-yard dash, however, was probably Al’s best event. A one-time school record holder in the event, Al also qualified for the state finals in the 220. Winter did not provide Al with any time off. A six-foot, two hundred pound forward on the basketball team, Al was one of the teams leading rebounders. Upon his graduation from North Olmsted High School, Al entered prestigious Yale University where he participated in football. Al also holds a law degree from the University of Pennsylvania.

Check back around noon for the next member of the Class of 2003!!