Welcome back to the Class of 2002 and our Meet the NOHS Athletic Hall of Famers. We continue this series with Tom Flora.

A very talented multi-sport athlete, Tom Flora was also very active in a variety of other activities. A member of the yearbook staff, Key Club President, student council, and Letterman’s Club are just a few of the activities in which Tom participated when he had some spare time. However, most of his free time at North Olmsted High School was spent on some type of athletic field. As mentioned earlier, Tom was an outstanding multi-sport athlete. As a member of the football team, Tom was voted as an All Southwestern Conference performer, captain of the team, the team MVP as a senior, the conference MVP and he was selected as a First Team All-Northeast Ohio All-Star. 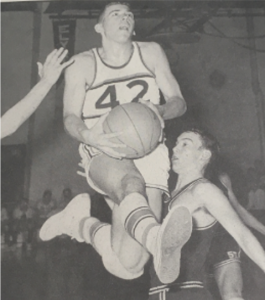 As a member of the basketball team, Tom was the team captain, an All Southwestern Conference performer, the team MVP as a senior, the conference MVP and also received the regional tournament MVP award while leading his team to a regular season 13-5 record. As a member of the track team, Tom was a three-time qualifier for the state track meet in both the hurdles and the high jump. After garnering all of the awards, Tom also had the time to be voted by his peers as the North Olmsted High School homecoming king. After graduating from North Olmsted High School, Tom attended Miami University where he received a degree in education. Tom has very fond memories of his days at North Olmsted High School and recalls the great influence of such outstanding educators such as Helen Wise, Hal Scrivens, and Ron Slater.

Thank you for following along and check back at 2 p.m. for the next member of the Class of 2002!!