Welcome back to the Meet the NOHS Athletic Hall of Famers series. We are continuing with Kerry Kennedy Garris.

As a student at North Olmsted High School, Kerry was an active participant in several activities. A National Honor Society Member, a physical education leader and a member of the yearbook staff were just a few of the activities and organizations in which Kerry was involved. However, her real love was tennis. An outstanding All Southwestern Conference performer, Kerry also 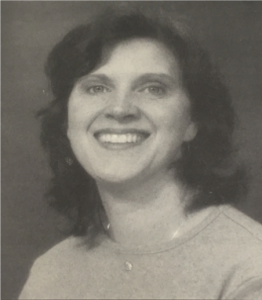 was a state tournament participant and the MVP for the North Olmsted girls tennis team in 1978. Kerry finished her career with a 43-8 singles record. A sports management and psychology major at Guilford College in North Carolina, Kerry continued to compete in tennis. It was here that her tennis game really began to blossom.

While attending Guilford, Kerry became a three-time NAIA All-American. Her 1981 team was crowned NAIA National Champions. Kerry also became an All Carolina’s Conference selection as well as an  All-District performer. Among the other honors that she garnered at Guilford were MVP of her conference, a member of the 1982 National Doubles runner-up team, the outstanding senior female athlete at Guilford College in 1983, the Carolina’s Conference Player of the Year, and was named the NAIA District Athlete of the Year. Kerry looks back at her time at North Olmsted High School as a time of great growth and maturity. While playing tennis, she learned a great deal about the concept of teamwork which has served her well in all aspects of her adult life.