Welcome back to our Meet the NOHS Athletic Hall of Famers series. Capping off the Class of 2002 is Coach Tom Peters.

A graduate of Olmsted Falls High School and Miami University, Tom was a teacher in the North Olmsted Schools system for thirty-four years until his retirement in 1999. An outstanding educator, as well as wrestling coach, Tom’s eleven-year stint as North Olmsted’s wrestling coach, elevated the wrestling program to a height it had never known. Some of Tom’s accomplishments with his teams may never be matched again. In one four year span in the 1970’s, forty-four straight times the 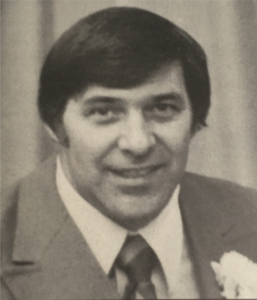 North Olmsted High School wrestling team went to the mats without a defeat. Among his many awards, Tom was named the Greater Cleveland Wrestling Coach of the Year in 1974, was selected as the Southwestern Conference Coach of the Year four times and had an overall record of 101 wins and 18 losses from 1973 to 1984.

Team titles are what good coaches strive to achieve and under Tom’s watchful eye and outstanding coaching, the North Olmsted wrestlers won seven Southwestern Conference titles as well as four sectional titles. In 1974, the team finished in the top ten in the state meet. Tom coached 46 SWC champions, 36 sectional champions, 13 district champions, and 9 state champions in his North Olmsted  High School career. After Tom retired as the varsity wrestling coach, he spent several years as the head coach of the North Olmsted Middle School wrestling program.

Thank you for following along throughout the past weeks through this series. Be sure to check back tomorrow as we get things started with the Class of 2003!!!